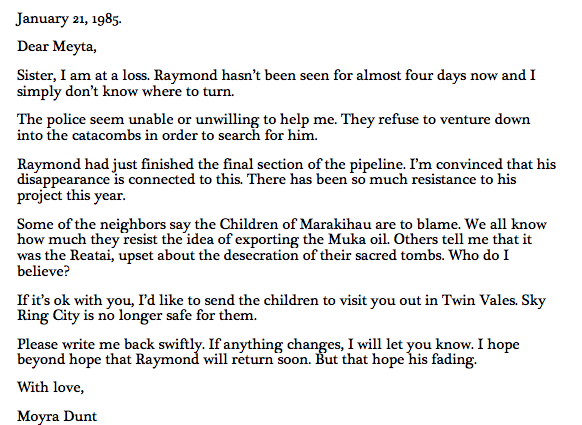 In 1985, Muka oil began flowing through massive pipelines constructed inside the pre-existing catacombs underneath Sky Ring City. The chief architect of this project – Raymond Dunt – disappeared shortly after its completion. His body was never found. This letter, recently translated, shows the anguish and grief felt by his concerned wife.

The original note on this posting suggested that the body had never been found. This was true until recent excavations under the water basin below Sky Ring City discovered a mass grave, composed of bodies ranging in date of death from 1920 to 2059. Dunt’s body was in fact discovered during this excavation and will interned at the upcoming UNESCO/Canadian Ministry of Heritage/ByoLogyc memorial/mausoleum/museum/medical research centre to be located at the heart of the city.